I've said it once, and I'll say it again... I love Pinterest. And if you are looking at this post, you probably arrived here via Pinterest.  So maybe you can help me....

I have an issue that I'm trying to sort out.... 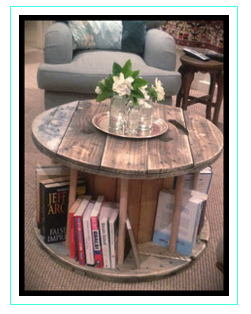 A few months ago, I put up my very first pin... it was for a repurposed cable reel table which I had made.   Click here for the instructions.

Within a couple of weeks, it had been repinned nearly 1000 times.  I was quite staggered.  (What a pity I wasn't selling them on my blog!!).

One day, I found myself playing around on the Pinterest site, and noticed that if I entered "cable reel" into the Pinterest search box, my little table came up on the screen hundreds of times!!! What the??

So I started clicking on the images, and noticed that some of them didn't link back to my blog (which is what is supposed to happen when you click on an image on Pinterest), they either went to another site selling something, or else there was an alert put up by Pinterest saying: 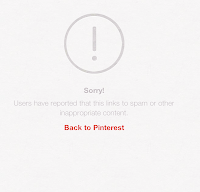 I sent a message to Pinterest to report this and I'm still waiting to hear an answer from them.

I think I might have to delete my original pin.... and replace the picture with another one.  But who's to say it won't happen again?  I certainly don't want to direct people to spam sites! 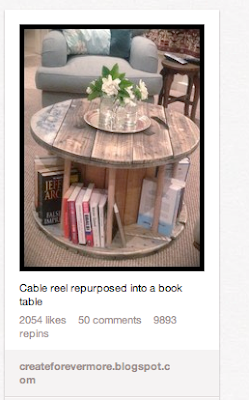 Just for the record, I'm going to load up a screen shot of my original pin - which has now got close to 10,000 repins.

I'm not a technical guru, so if someone out there can tell me what to do ... I'd love some advice.

Promote Your Page Too

What's Up in Blogland?

Sewing and Fabric Blogs I visit

Other Blogs I love

Welcome to my Blog.

Debbi
Australia
Hi, I'm Debbi Weiss. I live in the beautiful city of Sydney, in Australia. I have a wonderful hubby and two amazing children. I design, facilitate, and manage art & craft activities at large scale events. I also do some floral arranging work for private clients, as well as wedding bouquets, corsages and boutonnieres for bridal parties. Here and there I also do some graphic design which includes designing digital albums for private clients. In between my events, I am website manager and video editor at www.thefirstfewseconds.com - my husbands business in Personal Branding and HR related matters. On top of all that, I also am a very keen DIY'er, furniture revamper, foodie, and piano player...in no particular order.

Join me at my Floral Workshops

Pop in to my Etsy shop any time!